The Madsen family has been a figure in the Round Rock and surrounding community for decades. Clay seemed destined to carry the family torch. Growing up, he led many of us on the field, court, classroom and community to do as he did – compete and succeed. While doing so, he racked up many awards and trophies. There was no doubt the Clay was special, and he was destined to do great things. 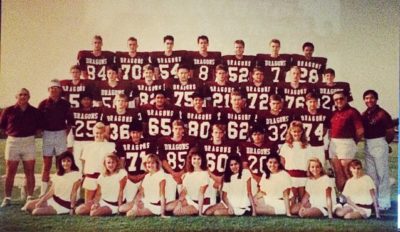 After the football campaign of 1990, he was diagnosed with cancer. For the next two years, he would lead us in a greater campaign. At such a critical time in young person’s life, when many lose touch with their family, values and faith, Clay drove us to find faith. Faith in the Lord, faith in our families, faith in each other, and faith in the community. He rallied his family, friends and community to fight this adversary, never showing signs of the toll it was taking on him mentally, and never realizing the strength and faith that he gave to all of those around him.

Now, we will continue to give to this community that Clay loved, and we will do so in his name. In 2002, we established the Clay Madsen Foundation to honor Clay by aiding families in his community who are fighting their own battles with cancer, and to help support these families in their efforts to fight this disease.

Before Clay passed, he asked his father, “Where are we going?” His father replied, “We are going to the house of the Lord.”

To which Clay answered his last words, “For Sure!”